On the Comics Collapse. Oh, and there's going to be a giveaway.

Now, I know I haven't written about the problems within the comics industry before, despite my posts mentioning and reviewing some books, and trying to boost comics that I think are worth a look. Partly this was because I still have part of the industry that tells good stories: non-hero books are a bit less converged than hero books in general. That's not to say there isn't a lot, but I can still find stories that are well written and drawn and don't play politics all the time, or at all. There are still good stories in sff comics, and I still get an occasional action or horror book. Hero books are rare reads for me now.

But, JD Cowan, Brian Niemeier, Jon Del Arroz, and others, notably the Diversity & Comics you tube channel have laid enough groundwork that I think I should chime in with some thoughts. Unlike most of these guys, I'm more into the DC universe for my heroes, so my references will be that direction.

It's not a recent event that comics have gone downhill. This is only the most recent in many events that have hurt the industry. And sales have historically shown every bad move, not immediately in every case(variant cover fever)(death of superman). But eventually there's a sales collapse after each one of these chases of fashion that comics has done. Collectablility was a terrible thing to pursue; comics are not MTG cards, nor should they be.

Each reboot of comics universe seen changes to the world and characters. Sometimes this has strictly been to create a history that made sense. But a lot of times it's been to create "jump on" points, in the belief that people that don't read comics will magically come in if it's now issue one, and you don't need to know the character. BS! I have friends that don't read comics that think if they want to, they have to start with Action Comics #1 and read ALL OF IT. So part of it is perception; whether or not it matters now, a character's history intimidates some people.

What do they do wrong in most every reboot? They change some characters. Not refine, like add details that fit established traits and history, but change. Let's make such character GAY! When they've a long history that says nothing of the sort. You want to play that game? How about a Green Lantern that's a family man? They did it in the animated series, and the character was cool. Or a celibate Green Arrow? Oh, wait, Connor Hawke was when written by CHUCK DIXON. Too bad Connor doesn't exist anymore that I know of. My last DC title I read was All Star Western(Jonah Hex), and I quit after Booster Gold pulled him into the present.

Now, a lot of characters are being replaced by "new, relevant" versions that have NOTHING whatsoever to do with the originals. Thia has gone back to the New 52 for DC, and Marvel has been doing the same thing more recently. But when they make Superman not relate to people, they lose readers. When Martian Manhunter isn't THE common part of Justice League of America, it doesn't work, especially when they've made him untrustworthy and shifty. This is not to mention stuff like the Chinese Superman and co. they've added recently(which I have no real opinion of), especially when they had heroes everywhere in the world. But let's toss them and igonre history for lowest common denominator bs.

How hard will it be to setup an alternative distributor at this point? I have no clue, but I will say stores don't want to order from EVERY worthwhile small writer and artist self publishing. So, if comics are going to be rescued from the death SJWs are engineering, a distributor is necessary as all get out. And don't talk to me about digital and web comics. I don't have a giant screen needed to read them well, and the files are huge. Webcomics can be okay, but I prefer my books physically.  Manga isn't something I'm for or against, and I'll likely grab My Hero Academia as the anime has been good, and Mr. Cowan recommends it.

Now, to the giveaway:

I found this day at my local library's friendshop both volumes of Rocketo, which I have discussed  before. As I don't need another set, I'm going to give them away together. These are library discards, and have some wear and use.Comment  below for the giveaway, which will be drawn at random on 9/23/2017. 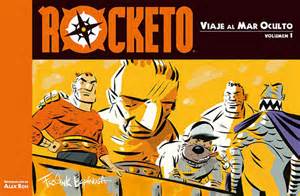 When you play Social Justice, the world loses.
Posted by Alfred Genesson at 6:22 PM