Thoughts on the first batch of comics from Castalia House

I'm talking both Arkhaven and Dark Legion here, and we've got four books to discuss.

Quantum Mortis: A Man Disrupted #1: Well, Ethan van Scriver and Diversity and Comics both gave this one such a bad time. It didn't deserve all of that. The art is not great, true, but there's no problem with the text heavy spots. It's a different book. They are kind of right on the generic panel bit happening, which might work well if they decide to eventually take this another direction: motion comics, which are part comic animatic(easier with simpler styles/figures), and part audio book. I could see that working well, actually.

Right Ho, Jeeves #1: A Binge at Brinkley: I'd not read any Wodehouse before, and honestly wouldn't have, but Chuck Dixon adapting this with Gary Kwapisz on art, his collaborator from Civil War Adventures? Sure, I'll check it out. And I'm amazed. This is light, funny, and the art is top notch and filled with detail, yet more caricatured than Kwapisz' other work. I look forward to the rest.

Rebel Dead Revenge #1: Stonewall's Arm: Mr. Gary Kwapisz with a solo work, and the first Dark Legion book, which Vox has stated is done and I believe about 300 pages. The art here is far more realistic in style. The story in just issue one has enough racial material that I doubt any other publisher would touch it, never mind the story's quality of art and writing. Yeah, this is a really well done book. I believe the phrase is, "Shut up and take my money!"

eCONcomics: Well, this is interesting. The art, from what I can tell, is there to keep your attention, and help focus on concepts. And yes, there are some sequential sections, but Mr. Keen doesn't quite get to presenting concepts in the comic book idiom. The concepts are all in text, which is fine, and his writing on economics isn't a problem. I'm less convinced that economics is a subject that can be well done in comics, that is properly using its unique advantages. This book certainly did not to that end.

Now, overall, I'm really happy with these. The pricing might seem a bit high, but there are NO ads, which typically litter comics every few pages. I'm interested in what the physical will look like, but will wait until the collections hit most likely. Is it a great start? No, but I'd say it's very solid, with only eCONcomics being one I wouldn't recommend, and Quantum Mortis less strongly recommended, only because so many comic fans are art focused.


When you play Social Justice, the world loses.

Posted by Alfred Genesson at 2:57 PM No comments:

I will make no effort to hide the fact that I really dig the old DC Elsworlds titles. For the uninformed, these take the characters of parts of the DCU and put them in a different time and place. The first one was Batman: Gotham by Gaslight. The DC animated films group decided it was time to make an animated version of the classic, and with my enjoyment of the orignal(and its sequel), I thought I would give them a chance, even after the debacle that was Batman and Harley Quinn.


And having seen the film, I can now solidly say they have lost the entire idea of what the DCU characters are, what heroism is, and are perfectly happy to throw the original under the bus to tell the subversive story they want to tell. Do NOT see this film. This will have spoilers.

As a piece completely apart from any version of the DCU, with NO knowledge of the characters, it might be fine. But give me the original by Mike Mignola, Brian Augustyn, and P. Craig Russell over this. That had great art, knew how to place a story in history, and willingly placed extra characters in the mix.

The film didn't even really try to match the mood the art set, just some mimicry of the costuming. Here's a panel from the original: 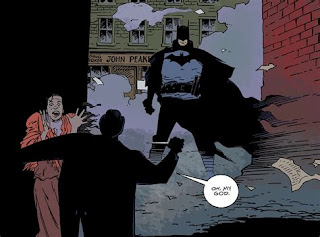 And now the costume from the animated: 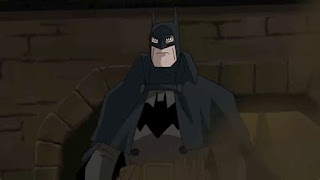 Yes, its similar, but the animated version is very bright in comparison. There's also the fact that the stories deviate greatly. In the comic, Bruce Wayne starts in London, and returns to Gotham by ship, where he encounters an old family friend and lawyer. None of this is present, nor is the lawyer, who ends up our villain. So instead, we jump to the Gotham World's Fair being part of our setting(which is in the sequel), and instead of a villain outside Batman's circle, they turn one of Batman's supporting cast into the villain.

One HUGE problem with this: Elseworlds aren't about completely changing characters, they're about moving them to other settings, and giving them different backgrounds. This is a massive change to the character. Because the villain is changed to Jim Gordon, who in the comics is a hero, and not given to fanaticism or murder. If the role had gone to Harvey Dent, who is also present, I could maybe have dealt with it. But of course, both of these deny part of the original premise: that Jack the Ripper not only got away, but went to Gotham after his crimes in London, which weren't even talked about in the film.

There's also a great deal of fixation on sex in the story, which I do not recall from the original. Of course, given the other deviations from the original story and plot, I shouldn't expect any uprightness to be left in the work when they're done. And there was plenty of story to fill time if they simply told both Elseworlds books as one film. in fact, I'd guess enough for an hour and half to two hours of animation. So why bother changing it? They hate the content, they hate the history, and they hate the geeks that actually know the stuff they deride.

Save yourself the time of watching the film and find the original book.

When you play Social Justice, the world loses.
Posted by Alfred Genesson at 11:10 AM 2 comments: