A trio of tiny games

Today I'm going to talk about three very small games from Button Shy. By very small I mean these don't come in a box; they store in a wallet, as they're 18 cards each. Here's a pic from BoardGameGeek for scale: 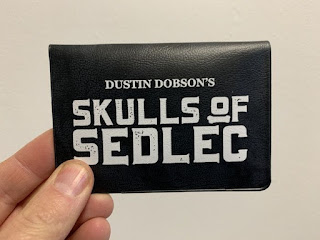 For the skeptical, I will tell you there can be plenty of play in those 18 cards. I've only gotten 3 games from them so far, though I did back their last campaign on KS.  A number of their games come from specific 18 card competitions, with specific themes. Most take about 20 minutes, so if you're waiting with someone for a bit, they're great. Unlike a lot of newer games, these won't break your pocketbook either, at $12 for the base games, and up to 4 for expansions.

Skulls of Sedlec is the first game I'm going to discuss. It plays with 2-3, and an expansion allows for solo play. This game is indeed based around the most famous example of Memento Mori architecture. 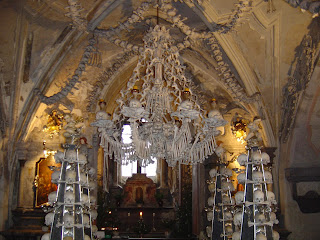 Each card has two skulls on them, top and bottom. Each skull type has it's own scoring conditions. On your turn, choose one of three actions: dig, collect, or stack. Digging involves turning over the top card from one of 6 piles. Collect is taking one of the faceup cards into hand. Stack is playing from hand into a pyramid shape. Stacking must be done when a player has two cards in hand.

The variety and distribution of different skull types is what makes the game interesting. One tactic won't work for every game. Sometimes, you won't get royals or peasants, but you might get priests and convicts enough to win. And it isn't just the quantity, but the placement that matters. Here's a pic(from BGG) of a final pyramid: 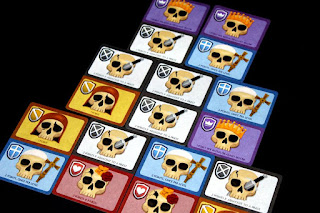 Seasons of Rice is a 2 player game of Rice farming. One side of the card is an ancestor with special scoring. The other is a rice field with features of paths, farmers, and buffalo. After ancestors are chosen(as well as starting fields), each player is dealt 7 cards. The game is split into two drafting rounds, the wet and dry seasons. The wet season, players choose 2 cards, one to their field and the other for the dry season. Hands are then swapped. When one card is left in hand, dry season begins. Dry season is selecting from the available pool until empty.

Rice paddies are scored as they are closed, with bonuses from farmers and buffalo within. Ancestors provide additional scoring, some at the end, and some during play. Loose buffalo cost points.

Tussie Mussie is for 2-4 players, and is based around Victorian flower meanings. Each card is unique, and has scoring conditions and possibly scoring features.

The game centers around an "I cut, you choose" mechanism. That is, the active player draws two cards; one is faceup, the other down. The next player chooses which one to take, which must maintain its up or down status. Cards are added left to right; adjacency matters sometimes. Three rounds to 4 cards each and the game is over.

I like these in the order I put them. Sedlec seems the most interesting, requiring flexibility and patience. Seasons of Rice has a tile laying and variable scoring that I like, as the ancestors may change your playing methods. Tussie Mussie will play quickly, even at four players, and the theme might draw some more gentle minded folk in.

Cower not! And play well.

Posted by Alfred Genesson at 5:07 PM No comments:

It's been a very long time. I'm currently recovering from Covid(that's recovering, not ill), and am on leave.  I hope I can do some after I get back to work, but I will make no promises.

A couple days ago, I saw a bunch of authors promoting this book in my Twitter feed, because it had just hit Amazon. I must confess I've had a physical copy for months, and have only now finished it. Partly, I think I have a harder time with print now over electronic. Also, I do a lot of reading via apps while I'm on breaks at work. Anyway, to the book!

This book definitely leans toward old school horror.  It's also a bit of gothic horror, and very much focused on the titular location.  I appreciate this greatly, because most modern horror is simply gore fest style work, at least outside the Lovecraft ripoffs, and even there, I suspect.  I will not attempt most modern horror as it is vile and normalizes evil, giving the appearance of sometimes being good.

Not so here. Evil is acknowledged as evil, and proceeds anyway, though our narrator(it is in first person) is torn over the acts he commits. There's not any moral ambiguity, though there is among the evil characters a Nietzschean philosophy of survival of the strongest.

I have only one minor complaint: the narrator uses CE for year reference. He is at least mildly evil already, so it does make sense.

Now, for a small bit of Spoiler based discussion, so scroll down to the conclusion if you wish to avoid this.

There's much in this book's narrative that reminds me of the David Cronenberg film eXistenZ.  In eXistenZ, it's a VR game that connects directly to the mind, and there are several game layers. The last line of the movie is "Tell me. Are we still in the game?"  Fiendilkfjeld Castle takes place largely in dreams. In fact, one cannot be sure if any of it takes place outside of dreams, though the last section appears to do so.

The main character and narrator is also unreliable, as he is clearly at least being driven mad. This is in addition to the multi layered dreams, so one is not sure while reading if something happened or not. I will admit this did slow me down a little in frustration, but more of not comprehending than with the story itself.

The story, though sometimes confusing, does have rewards for the reader, and clarifies by the end.  The horror is a type that truly does horrify; it lingers on, as the concepts and conceits of the tale hold  the reader much tighter than the gross normalization of evil that most modern horror has. I must congratulate Matthew Pungitore on his part of reclaiming even part of a genre long lost to degenerates.

Posted by Alfred Genesson at 12:29 PM No comments: