What's this? Yes, I'm going to write about something other than SFF and games.  I have good reason: many in the SFF realm seem to be unaware of comics outside of hero books. Brian Neimeier kicked this off in my head with a tweet: 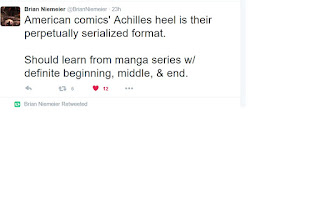 And I think, I know of plenty of good comics that do that. BUT, for the most part, you have to look outside the superhero genre. I've gone through my library, and picked out selections in a few genres. These lists are by no means definitive, and just have some of what I believe are the best examples of graphic storytelling.

Onto today's genre: crime. This is an offshoot of the mystery genre, and includes some detective stories, but is inherently on the more violent side of things. Crime comics have been around for a long time, and they died out for awhile with the advent of the comics code. I don't have any of the old crime books, nor have I read them, but the panels I have seen were brutal. This is not a kid's genre, and moreso in graphic format.

I know, some are thinking Crime and Vertigo? I thought they did horror and such. Let's look at the list.

A History of Violence: Good grief, this story's good. Please don't think the movie's like it; there's so little similarity, it's ridiculous.

100 Bullets: Azzarello and Risso's masterpiece of conspiracy, crime, and death. Each volume contains it's own symphony of violence.

The Kitchen: A crime story following the wives of Irish bosses in jail. Yes, there's plenty of death and betrayal.

Scalped: An FBI agent returns to investigate what's going on at the reservation he grew up on.

And, for awhile, there was the Vertigo Crime line. Some were meh, some were great. Here's two standouts: Rat Catcher and The Bronx Kill. But seriously, track down the line if any of the above worked for you.

Now, that's not to say there aren't significant works outside Vertigo. Here's some of the good stuff outside the hands of DC.

Sin City: I would be remiss for not mentioning these. Honestly some of Frank Miller's best work, especially by himself. You don't NEED to read the volumes in order.

Criminal: Brubaker and Philips write some mean comics together. This series is largely standalone volumes, but some are better having read previous ones.

Hawaiian Dick: An actual detective book? Yep. Stylish and filled with atmosphere, these stories even cover some of the folklore and superstition of Hawaii. Also, no sex within the books, and one of the earliest read for younger ones here. Still not for kids, but teens, YMMV.

The Last Days of American Crime: A near future where the US government is going to turn on a signal that will stop thought of wrongdoing. Last chance for a heist.

A Dummy's Guide to Danger: A private detective with a ventriloquist's doll for a partner. Definitely fun. Plenty violent(not over the top), and there is some nudity(corpses), but otherwise it might be okay for teens.YMMV.

Please keep in mind these are only selections, and ones that I personally consider good. These are crime books, the world is filled with nasty people, and even the protagonists have the potential to be mean if not sadistic. If crime books don't work for you, next we look at Spy comics.


When you play Social Justice, the world loses.
Posted by Alfred Genesson at 3:29 PM