Cower not, fierce reader! Today, I'm actually departing from my format. Not because of the book itself, but because this served as a reminder that I'm an Independent Contractor. 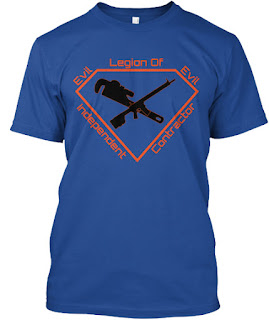 Yeah, it has nothing to do with the book. If you like it, they're available via the left sidebar link.

While this was already in my reading queue, Vox Day moved it up by naming it his Dragon Award nominee for Mil SFF novel. Having read a good chunk of that, I was looking forward to a better view of what Vox thinks is good SFF. Honestly, I'm a bit disappointed, but I'm guessing he hasn't read the others I have this year(He is no slouch by any measure in reading volume, and has a different exposure than I do.), and that's fine.

Oh, yeah. Starship Liberator. I will try to avoid putting in too many spoilers, I don't care for them personally.

There's a good amount of action in this book, and most of the tech is well thought out, whether or not it's plausible. It is most definitely consistent. We've got strong political fixtures in opposition, an interesting twist or three, and overall, it's fun.

The main character is, or at least wants to be a hero, and is determined to do the right thing. He has friends to help him, and gains allies along the way.

The writing itself is strong, and clear. While I didn't find it exemplary, it wasn't boring prose; VanDyke has a very large catalog, and produces a lot. But, most of the book didn't really hook me. Oh, yes, I was drawn in well before the end, but I found enough lackluster to say I won't continue this series.


The bad(Sorry, some spoilers here):

At one point, the book was literally setting itself up as Space Nazis versus Space Commies. I wish I were exaggerating. Then, a third group enters, that appears to be good, but ultimately have a corrupt exploiter/slaver segment.  There's more I could go int, but I don't want to either give away to much or make statements that are false about the author.

Plotwise, this book has Hero's Journey all over it. Two setbacks instead of one, no big deal.  His second set of allies are a surprise to everyone, when it should be obvious what's going on.

Toward the end, it felt a bit like I was reading a domain play version of Omega Force, which I haven't touched for awhile. OF is fun, but honestly a bit of A-Team in space. Nothing wrong with it, but know that Starship Liberator reads close to a big picture version of that.

What do I recommend instead?

To name a few. Peter Grant also has some good stuff.

Overall, it wasn't bad read. But what I saw of this, the previous books of Van Dyke's I've read(Plague Wars 0-1), and his behavior on the Castalia House blog to Fenris Wolf, I'm not reading him again.

When you play Social Justice, the world loses.
Posted by Alfred Genesson at 2:06 PM