Yeah, it's not an ApN comics post. That'll be later in the week. Right now, I want to talk about a book that helped bring back horror comics.

30 Days of Night started coming out in issues 15 years ago, and set the horror comics scene on fire. IDW Publishing was young and small then, and this book exploded them onto the market. Why? Firstly, the team was great. Steve Niles and Ben Templesmith had a way to creep people out. Check this out: 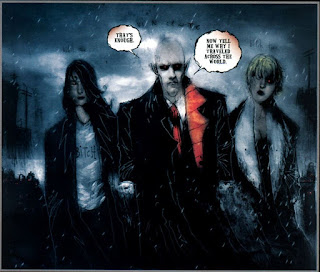 I'm going to try to avoid spoilers, but some I won't. Here's the big thing for the first volume: Vampires attack Barrow, Alaska, on the longest night of the year, which is 30 days long.

Now, if any "true die-hard horror" fans are reading this, I'm gonna piss you off: only read the first three volumes. I tried reading some after that, but the core of the book isn't there. Why? First, Niles and Templesmith got popular, and couldn't work together all the time. Second, Niles' writing got darker. The first three books have a bit of hope and duty in them, and the nobility to fight in the face of terror redeemed the books from the darkness. Third, and likely, the best reason, is that books 1-3 make a whole story arc, and there's no need for any more, though book one does just fine on its own as well.

Niles did write a final bit a while back that is collected in the Cal MacDonald omnibus vol. 3, that honestly, is a bit of a letdown in some ways. I have no problems with the Cal character or stories, they aren't hopeful, they're drugged and drunken monster detective stories. I didn't mind the crossover as much as the 30 Days books past vol 3, as I could just think I missed a bunch and it changed the character.

What's that? Oh, the movies? The first one captured a good chunk of the feel, but could have been more bleak by being longer. Acting was ok, and the writing was close enough that I was happy with it. The Dark Days movie that went straight to DVD was meh. More like a typical horror film, gore for the sake of it. Nothing like the second book, either.

Anyway, there's some thoughts on a book that in a lot of ways, brought back horror comics as a genre.

Posted by Alfred Genesson at 11:12 PM