ApN Comics: Tarzan and the Jewels of Opar, adapted by Russ Manning

Time to talk about some pulpy comics again, and I've got one of the most adapted characters to entertain.

If you've read the novel, you know the story. Russ Manning didn't really look to change the tale, it wasn't done at that time. Reading the comic, I don't even think a single line of text in a thought or word bubble changed from ERB's manuscript(I haven't taken time to check, but see no reason Manning would add to his workload). Manning did a lot of Tarzan newpaper strips, but these were from Gold Key comics issues. Here's the most disappointing part, the cover: 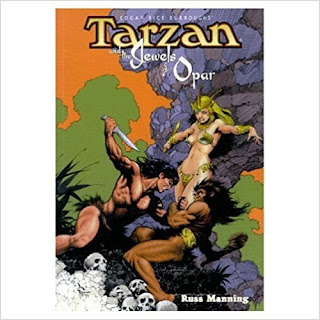 It looks pretty good, and does represent a part of the story, but it's not Russ Manning's work. And while that in an issue isn't bad, on a collection from classic artists, I expect to see art from the guy that drew it.(Yes, I said guy. Deal.) Now, Manning's art is mostly fairly realistic, with the characters having mostly average builds. Not quite my favorite, especially with fantastic tales of adventure like Tarzan stories. My only artwork critique is that Manning seems to have more issues with static poses and friendly encounters than action and conflict, which come easily to his hand.

If Manning isn't to your taste, that's ok. Plenty of others have drawn Tarzan, and I'll cover at least one more later on. But, for next time, a more modern pulp style work that deserves its teased sequel.

When you play Social Justice, the world loses.
Posted by Alfred Genesson at 4:27 PM