So this time, I'm going to cover a comic that was co created by Frank Frazetta, and scripts by Gardner Fox. Frazetta only stayed through the end of issue one, as the stories changed far from his original vision. Bob Powell(no slouch, but he's not Frazetta) took over for the art duties for the rest of the life of the character.

Frazetta's original vision was for a prehistoric adventure world, and the editor pushed it to be a more straightforward Tarzan copycat character. By the way, here's the cover for the collection from Dark Horse: 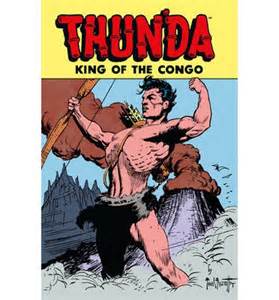 Freaking awesome, right? The first issue had four stories all drawn by Frazetta, and there's some wondrous stuff within. He's a pilot that crashes into a "lost world" (as far as the initial story), and loses his memory. He still has his pistol, which save him a couple times, but he starts training and makes himself a bow to hunt and defend himself.

There are also primitive men and neandrathal like men that are at war. These are at war, and there's a beautiful woman leading the tribe. They see our amnesiac hero defend himself: 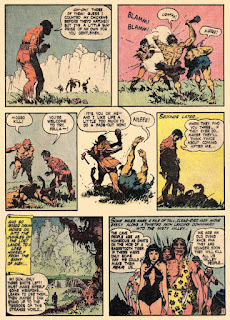 The first story ends with our hero earning his name after killing a giant snake god, worshiped by the cave men(neandrathal like).

Unfortunately, after this story, STILL within the first issue, the world is suddenly shifted from a prehistoric world to another version of Africa, albeit with some fantastic elements. Thun'da raises a sabertooth cat, that becomes a loyal pet, Sabre.

The first issue still has Frazetta throughout, though it's not the same world as the first issue, it's still good adventure, though it reads more like a Tarzan story than something that has a world with the great monsters from a world like Conan.

After issue one, Powell takes over, and does a decent job throughout. Honestly, his work is pretty comparable with any of the other top tier artists short of Frazetta himself and Hal Foster. Some stories also appeared in a book called Cave Girl, but all are in the one trade.  Recently, Dynamite entertainment did a Thun'da miniseries, which I need to check out, as they try very hard to do well by old pulp characters.

I'm thinking a ERB Tarzan adaptation for the next installment of the series, likely one of the two Russ Manning comics I've got. After that, I'll alternate back to another that isn't ApN, but is definitely pulp, and a bit of pulp revolution stuff.

Posted by Alfred Genesson at 9:30 PM